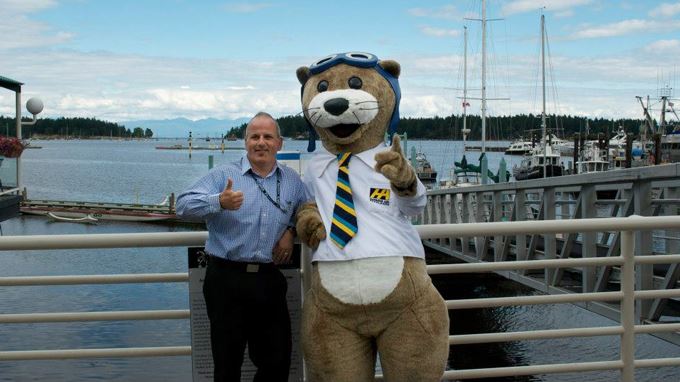 Travelling the World in a Bathtub with John Winter

If someone stopped you on the street and asked you what bathtub racing, the Isle of Man, Nanaimo, Harbour Air and British Columbia have in common, would you be able to answer?

Let me explain. The Isle of Man is a small island in the Irish Sea. If lines were drawn between Scotland, England, Wales and Ireland, John Winter’s hometown of Castletown, on the southern tip of the Isle of Man, would be directly in the middle. From this staging ground has grown one of the world’s most intense annual competitions: The World Tin Bath Championships.

Now, out of the billions of places in which one could live on this planet, can we agree that it’s rare for someone to live in just one city with a proud bathtub racing heritage? We can? Alright then, what are the chances of living in TWO such cities in the same lifetime?

It’s a distinction John Winter is blessed with and proud to share.

John is the base manager of Harbour Air’s Nanaimo terminal. I caught up with John to learn more about his lifelong obsession with travel and his knack for winding up in bathtub-centric cities.

John: I’ve spent the past 22 years in aviation and travel in some capacity. I got started working in the industry in Great Britain as an 18 year-old at the company that would later become British Airways. I began in reservations and ticket sales and from there I progressed into sales and marketing before striking out on my own as a travel agent for about a year. After that I spent about two years out of the travel industry backpacking.

So you weren’t working in travel for that year, you were just travelling yourself.

Right, I suppose so (laughs). Whether I was backpacking or just travelling in general, I was crazy about finding new places to visit. In that two year window I spent time in the USA, Australia and New Zealand before coming to Canada and getting back into working in the travel industry.

How did you start working with Harbour Air?

I initially started doing temp work in Coal Harbour, so I could see the planes taking off every day. It was so beautiful, seeing all the activity. One day I wandered down at lunch and basically asked for a job out of the blue. I met with Chad Wetsch who invited me for an interview and he offered me a position in the freight department, which was new to me and I was happy to take. It was a new job in a new company, a new challenge. I worked there for three years, learning the ropes of that end of the company before becoming the company’s freight supervisor. Then the position in Nanaimo opened up and I couldn’t resist the opportunity to live in another place, to travel somewhere else. That was six years ago in August and here I am today. Just like Coal Harbour, I see the dock every day from my office in the Lighthouse Building. I see the planes taking off and the new people coming to visit.

What are some of the common questions you hear in your position?

We get asked how big we are all the time, which can mean a couple different things. We’re actually one of the world’s largest seaplane company with over 40 aircraft: the DeHavilland Beaver, the Otter and the Twin Otter.  They truly are legendary Canadian icons.

With regards to people, we’re a completely self-sufficient company. This means that we don’t need to hire other companies or contractors to maintain our aircrafts. In the summer we have over 300 staff members at 9 different locations. There are dock operations and the Customer Service Agents, the people who load the aircrafts, take reservations and are the front lines, the people who deal with our customers.

From there we have ground transportation crews and maintenance specialists, the people who do mechanical work, paint the planes, and then there’s the quality assurance that comes along with that.

We manufacture things for ourselves, we know our own product inside and out. Other airlines will actually come to us to buy parts or to paint their planes or service them.

Another common question is just where do we fly to and how much does it cost. People are surprised at the price because typical airline travel is really expensive because of how long it takes to get places. People are surprised because they can leave here and be checking in to a flight within an hour at the international airport in Vancouver, and it’s actually quicker to get there from Nanaimo then it is from Abbotsford.

What about some of the common myths of seaplane travel?

It’s expensive or it’s not reliable. We actually won an award called the Cumberbatch award for our safety record because of how we report hazards or issues we come across. Safety is the key for the entire company. It’s our number one priority. We’re all trained to identify and follow up on hazards on the aircraft, on the dock or even in the office. It’s a whole system, it’s part of the interview process, having the right to say no if something feels unsafe. We’re dealing with people and their lives.

What’s your favourite thing about living in Nanaimo?

The absolute best part of this city, I mean there are lots of cool places to visit, lots of authentic west coast spots, but the coolest thing is the International Bathtub Championships. Every July people get together and build bathtub boats, an old school bathtub built on a fiberglass hull with an outboard motor. The trip is  36 km around the harbour, around the straight of Georgia, around the Chelsea islands and finishing in Departure Bay right here in town. The race takes about three hours, these people are on their knees in a bathtub in the ocean for three hours.

It sounds crazy and it is, but these people are incredible. Imagine taking your bathtub, strapping an outboard motor on the back and just hoping for the best. People get investors and backing for their boats, they have people with a chase boat in case you do need rescue. The champions every year arrive at the beach and they have to jump out of the boat after three hours at sea and they race up the beach to ring a bell on shore to win the race.

The really weird thing is that back home on the Isle of Man we had a similar race, just minus the motor. We used the old style tin bathtubs, you have to build a boat that will float long enough to get across the harbour beside Castletown.

Wait, there are bathtub races in other places in the world? And you’ve lived in two of these cities? Come on…

I know! (laughs) So the two places I’ve spent the majority of my life in, they both have this immense passion for navigating the ocean in a bathtub. I don’t know what it is, I guess I just attract that sort of sense of adventure wherever I go!

John Winter’s race might be a slow one, but it’s certainly been steady. His is a race to experience more, to meet new people and tackle new challenges. He’s lived in different countries all over the world because of an innate desire to see what exists beyond the clouds.

Through his travels, John has gained multiple perspectives of the world’s diversity; the sort of perspective one can only find after watching bathtub races on opposite sides of the planet.

And after settling in our little corner of the world, the sky’s the limit for John and his family.