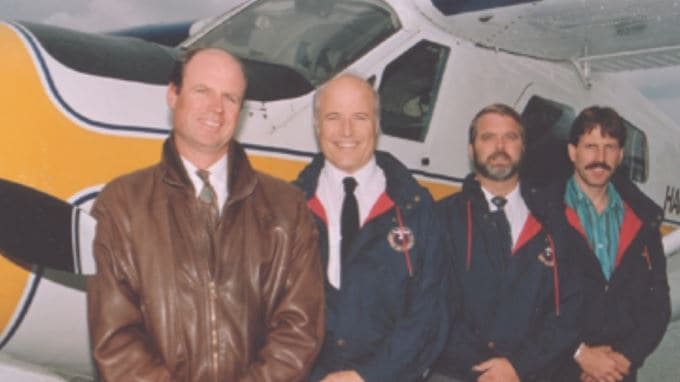 The Rise of an Aviation Company with Peter Evans

There’s always a new adventure behind every turn in the road.

Or in Peter Evans’ case, behind every mountain jutting up from the land below. Peter (current President for the Harbour Air Group) has worn many hats in the three decades he’s been with Harbour Air, but his role has always been about leading the company to new heights while retaining its heart.

So far, so good for Peter, but the sky’s the limit.

I caught a few minutes of Peter’s time a couple weeks back to ask him about a career spent exploring the sky.

Kelvin: Hi there Peter, thanks for taking the time to chat, I really appreciate it. So what are you up to today? I gather you’re in and out of – wait, where is your home base?

Peter: My home is in West Vancouver but home base, both office and work, well, that’s been a moving target for some time. I lived in North Vancouver for twenty years or so, moved to Gibsons for a few years and then back to West Vancouver in 2014. I’ve been with the company almost thirty years now with an office downtown and one at the airport. I had an office out here for twenty years but when we opened the new terminal downtown, I moved there and then very shortly after that, I came back to the airport to look after the maintenance department as well as my usual presidential stuff. So, I have two offices. Plus my truck!

That’s where all my best meetings are held! Hands-free, of course.

Peter: To do a job like mine, wherever the telephone and computer are, that’s where the office is.

Tell me a little bit about your origins and the role you played in the early days of Harbour Air.

That could get to be kind of a long-winded story.

From a background perspective, I didn’t start flying until I was about twenty-four, I was very fortunate prior to that time to be engaged in work that gave me some management experience primarily in retail and wholesale. And during that time, I had been married for a couple of years and my wife was suggesting we needed to do something in life we really wanted to do. One of my mantras is that you always try to do something you’re passionate about. I always thought that I wanted to be a pilot and she encouraged me to do it. That was well over forty years ago.

From there I went and flew in other parts of Canada, flew in the bush primarily. I really liked living out there but it was very poor pay and seven days a week so it wasn’t great that way.

Once I decided it was time to leave the bush and finally return back west again in 1979, I went to work for a company that doesn’t exist anymore, Tyee Air in Sechelt. I worked there for about seven years, and in 1982 when Harbour Air started, they started their operations off the same dock facility that I was working from in Vancouver Harbour with Tyee.

I got to know Greg McDougall (Harbour Air’s current owner and CEO) and the others at the very beginning of their time and in those early years, they asked me if I wanted to come and work for them and I said, “no, I like my life” on the Sunshine Coast. I didn’t want to live in the big city. A couple years later, things were changing on the coast, Tyee Air was failing and wasn’t experiencing the same growth as Harbour Air. I also had the arrival of my son in 1984, and I decided I would take HA up on their offer. So in February of 1986, I arrived in Vancouver to fly for HA and very shortly after that, became Chief Pilot given my experience at the previous organization.

It sounds like you’ve worn a lot of hats.

But really what happened there, Kelvin, is if you look at our history, the company was small when I arrived. There were twenty employees and it was in a huge growth curve in ’86, ’87, ’88, ’89. At that time Harbour Air operated multi-engine aircraft and we carved out a niche for multi-engine aircraft, forming a company called Jetwest. I was their operations person for awhile as well. It was decided that wasn’t in the area we wanted to stay in – it wasn’t earning us any money, it wasn’t killing us either but it wasn’t working for us. Then in ’86, ’87, ’88 when Greg McDougall, the owner, was going through some partnership changes I ended up acting more as a General Manager, I guess you would say, for all those years. Which is why I said to Greg in 1993, “You know Greg, at some point if we keep growing I can carry the title of Operations Manager but in the organizational sense, the staff are probably going to get confused as to why the Flight Operations guy is telling them what to do.”

I’ll admit, it’s a little confusing for an outsider, I can see where there might have been potential issues.

So we agreed that at some point, we were going to have to change that. Well, it took until 2007 to get around to doing that because it all worked despite any perceived confusion. We continued to grow and we had lots of people, and everybody knew who I was and nobody cares about titles around here, certainly I didn’t care. I was the Operating Manager for years and years and years until 2007 when Greg, who was carrying the title of CEO and President, agreed that this was the way to solve the problem. I would become the President and Operations Manager.

The reason for both those titles, comes from the regulatory world of Transport Canada, who gives you your Aircraft Operators Certificate. The regulatory framework of the airline requires three positions, the Accountable Executive, the Operations Manager and the Chief Pilot. So that’s why the titles have those names attached to them because they identify the people who held the positions as far as regulationsare concerned.

Right. It’s fascinating. You have to achieve these specific levels of certification to run the company, just like a pilot has to achieve their hours in order to fly.I think what people appreciate when they look at companies like Harbour Air is the evolution and the desire to grow and improve. The fact that Greg and yourself have been there basically since the beginning speaks a lot to the dedication of a company to keep getting better.

Yes.  I think you probably figured it out but Greg is the entrepreneurial type, not that I don’t have those bones in my body as well, but it was more in his wheelhouse to be that voice and drive. If you look at most successful organizations that started small and then grew, there’s usually those two sides. The entrepreneurial guy runs around doing what they do and then there’s the guy that functionally makes it work. And Greg has agreed that is the case, that’s kind of the way it worked. There would be periods of time where Greg and I wouldn’t even converse with each other, let alone by email or anything. We didn’t need to. We knew where things were going and what our responsibilities were, we knew what was supposed to be happening and my job was really to implement ideas and to hopefully make them happen.

As long as you had the same goals and the same basic culture, right?

Culture, exactly, yes. That’s what I believe has made us successful, we have a culture of “we can do this, and don’t be afraid to take on anything challenging that comes your way, you don’t have to say no, you can say yes and figure out how you are going to do it as you go.”

Next time, in Part 2, Peter and I talk about life as a child and the fact he almost chose a life on the water instead of a life flying high above it.