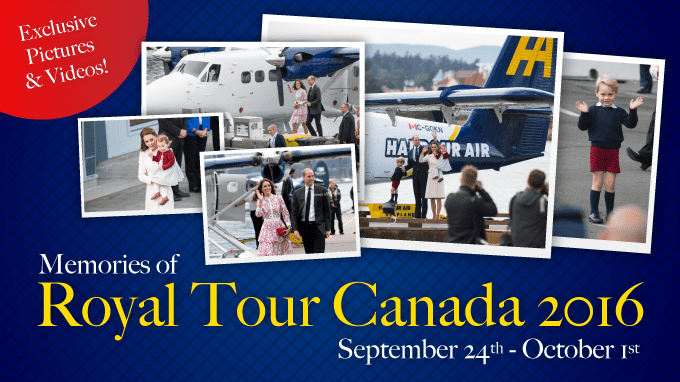 For the people of British Columbia and western Canada it was a thrill and an honour to host Their Royal Highnesses The Cambridges during Royal Tour Canada 2016. For eight days in late September and early October, the Duke and Duchess made Victoria their home base and travelled to communitues all along our western coast just like we do, by boat, by car and of course, by seaplane.

Harbour Air was honoured to provide seaplane transportation for the Duke and Duchess of Cambridge and the young Prince and Princess during their visit. What follows are our memories of the two Royal flights during the family’s stay.

On Sunday, September 25th, Prince William and Duchess Catherine traveled by seaplane from the Victoria Harbour Airport to their official arrival in Vancouver. The 30 minute flight the Duke and Duchess enjoyed is the same as the scheulded flight that connects hundreds of thousands of British Columbians and visitors each year. In Vancouver, thousands lined the seawall and gathered in nearby Jack Poole Plaza to greet the Royal Couple, as did BC Premier Christy Clark.

The Duke and Duchess arrived to enthusiastic applause from the Union Jack-waving well-wishers gathered on the seawall.

Following their arrival at the Vancouver Harbour Flight Centre, the Duke and Duchess visited a Vancouver women’s centre, the Immigrant Services Society of British Columbia New Welcome Centre and Telus Gardens, where they met members of Canada’s olympic team.

As the final scheduled stop on Royal Tour Canada 2016, and the first open public appearance of Prince George and Princess Charlotte, the Cambridges bid farewell to Canada at the Victoria Harbour Airport. Arriving by motorcade to the thrill of thousands who lined Wharf Street and the surrounding seawalls, the family’s entrance will be forever remembered by Prince George’s enthusiastic two-handed wave.

What a pleasure having the Cambridges visit the places we British Columbians call home! Thank you to the Duke and Duchess, the Prince and Princess for your visit and please come back soon!