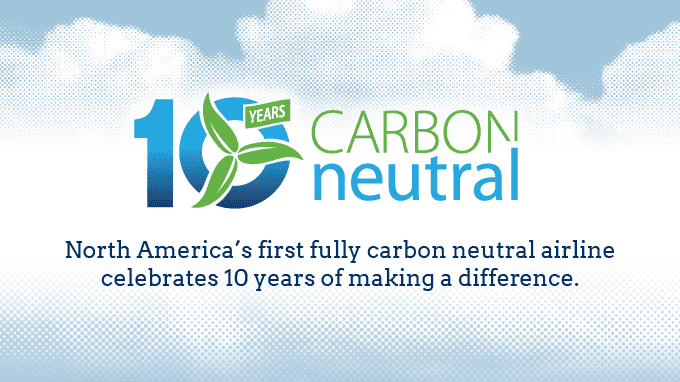 October 25, 2017, Vancouver, BC – BC-based Harbour Air Seaplanes is celebrating its 10-year anniversary as North America’s first carbon neutral airline. Committed to its BC roots, the airline partnered with local company Offsetters Climate Solutions in 2007 to begin calculating and offsetting the airline’s carbon footprint. Since then, Harbour Air has offset 100 per cent of its emissions associated with seaplane fuel use and corporate operations.

“We know that a huge part of our success is the beauty of the West Coast experience that we offer. Which is why we are deeply committed, and proud, of our sustainable accomplishments to date,” says Randy Wright, President, Harbour Air. “This year marks two incredible milestones for us: 35 years that Harbour Air has been operating in BC; and, 10 years since we committed to being 100% carbon neutral.”

Through this partnership, Offsetters has measured and provided strategic recommendations to reduce Harbour Air’s footprint. The #FlyCarbonNeutral program has resulted in more than 108,000 tonnes of annual carbon offsets to date, fuelling more than 10,000 cookstoves for families in Uganda and the protection of more than seven million hectares of the Great Bear Rainforest. In addition, the airline has reduced its total emissions per revenue dollar by 21%.

“We are proud to have worked with Harbour Air for the past 10 years to not only make them North America’s first carbon neutral airline, but to support them in reducing their footprint and educating passengers on the importance of climate action. The impact they have had demonstrates first-hand how small investments—such as offsetting the amount of one passenger flying to Victoria to Vancouver, which may seem minimal at only 8kg CO2e—over time, creates a larger collective impact of purchasing over 108,000 tonnes of offsets from projects around the world,” says Phil Cull, CEO of Offsetters. “We are proud to partner with and look forward to continuing to measure, reduce and offset Harbour Air’s footprint with projects from across the province and around the world.”

Over the past ten years, Harbour Air has hosted more than 3.5 million passengers, a growth of more than 40%, standing as a leader in business and sustainability in British Columbia. “Being a sustainable and responsible corporate citizen is not only embedded into our organizational values, but, I believe, vital to our success in the community,” says Wright.

In addition to its #FlyCaronNeutral program, Harbour Air has also introduced a number of initiatives to reduce its impact and become carbon neutral. The airline implemented a reusable, paperless ticketing system, introduced a web-based system for payroll and invoicing, installed a one-acre green roof, 50 solar panels and four large beehives on the recently re-modeled Victoria Harbour Airport, and has been named one of Canada’s best managed companies for eight consecutive years.

Offsetters is one of Canada’s largest and most diversified carbon management solutions company. Its team of industry leaders specializes in the origination, development and commercialization of high-quality carbon offset projects, and through a comprehensive offering of sustainability consultancy services Offsetters helps organizations understand, reduce and offset their climate impact. For more information, please visit www.offsetters.ca.