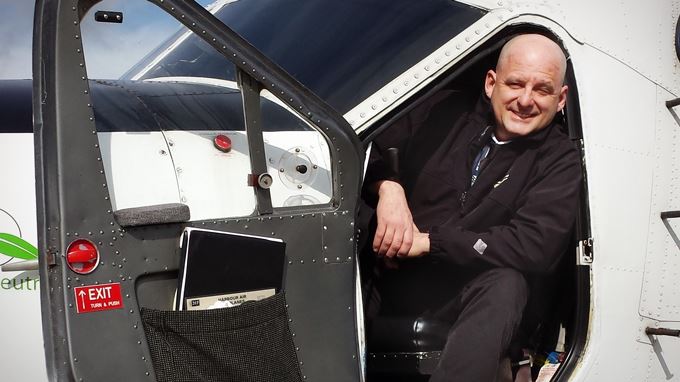 Dan Cummins and a Life Spent in the Clouds

Catching up with a seaplane pilot isn’t always easy to do in the traditional sense, considering that their office is usually in the sky.  Anyways, Pilot Dan Cummins was more than happy to hook up over the phone from Victoria to share a little bit about a life spent around seaplanes.

Dan: It all started when I was really young, my grandparents lived on the coast in Ocean Falls. They were right beside a float plane base and I fell in love with them really early, watching them take off and land in the water at an early age. I was hooked. I went and took lessons right out of high school before going off and doing other things. Around 30 I came back to the industry and got my license and certification all taken care of.  My first real job was through a mutual friend and I got hired as a first officer flying a Twin Otter in the Maldives, which was really cool. I did that for a year and half before landing a job in Vancouver with West Coast Air. I worked as an first officer for a year and then started flying a Beaver as a captain.

What are the main differences in responsibilities between a first officer and a captain?

As a first officer, you’re sitting beside the captain and helping take care of the aircraft, the passengers and the overall flight. Single engine aircrafts only have captains, they take care of everything. On twin engine planes the first officer is usually a junior pilot, learning more about the path to becoming a captain. Today I’m actually flying as a co-pilot and a captain. You build experience and time in the right seat as a co-pilot before getting hired as a captain, and after that experience you’re good to get a job higher up.

Higher up, literally! Sorry. Anyways, it sounds like the training is all built in.

Right, the training is built in because Harbour Air is very tough company to get into. We’re lucky because we’re one of the best if not the best float plane companies in the world. It’s tough to get a job, the standards are so high.

What’s your favourite thing about your job?

It’s funny, I’ve done every job you can think of – construction, a paper mill, I’ve done a lot of real jobs. This is a real job too, but it’s one where I actually enjoy going to work in the aviation industry. I look forward to flying a plane, which is cool, it’s fun.

Harbour Air, as an employer is really getting better every year.  I’m going into my tenth year!  The core values of the business include health and wellness, it’s really fitness orientated, we all ride bikes and do triathlons together.  It’s a really good group of guys to work with, a cool culture that’s developed over the years. Greg McDougall (Harbour Air’s owner )  is really big into cycling, he does the BC Bike Race, Whistler GranFondo, Tour de Victoria and more. He really encourages people who want to enter races. The company keeps me young and healthy!

Do you have a favourite event or a place you find a way to visit every year?

Whistler, definitely. We go a couple times each year just to spend time there. We fly in the summer, that’s always nice.  Whistler Air’s operations usually start at the beginning of spring and it’s a fantastic route to fly, sure does make it easy to get there.  We fly to Vancouver Island once or twice a year too, but definitely Whistler is my favourite to go to at least two weekends a year in the summer. We’re more of a biking/hiking family, not as big into winter sports. The kids like to do nothing so it’s a bit of a challenge, but we force them out of the hotel where there’s no wifi.

What are your 5 favourite places to visit when you’re not working?

I’ve heard a rumour that you’re quite popular with the celebrities who fly in and around the lower mainland. Got any cool stories for us?

Sully Sullenberger, the guy who crashed the Airbus into the Hudson River. He sat up front with me during the Olympics. He told me everything that happened, it was remarkable.

Paul Bettany and Jennifer Connelly, I flew them and their two kids out to Tofino. They were incredibly nice, they’re both into hiking, Jennifer Connolly is really into the outdoors. I also met Harrison Ford when he was here a few years ago too, he was flying to do a movie.

The best one though was Burt Reynolds, he was dressed in all his 70’s gear.

Oh man, did you call him on it?

(Laughs) It was for a movie too. I really wanted to ask him if that’s what he wears all the time though. I wisely thought better of that idea, however.

A veteran pilot who’s seen most of the world from up above, Dan Cummins is still a kid at heart after all these years. Ironically, he’s humble and remarkably down-to-earth, a man who’s been passionate about flight and travel his entire life.

“It’s just always an amazing experience. You get to fly around in an airplane, meet cool people and see incredible things. I once saw a group of about 20 humpback whales breaching and we circled them for 20 minutes. That was something else. I get to see different whales all the time, below the water while I’m up above it. Every day is an adventure to somewhere new for myself and the passengers.”