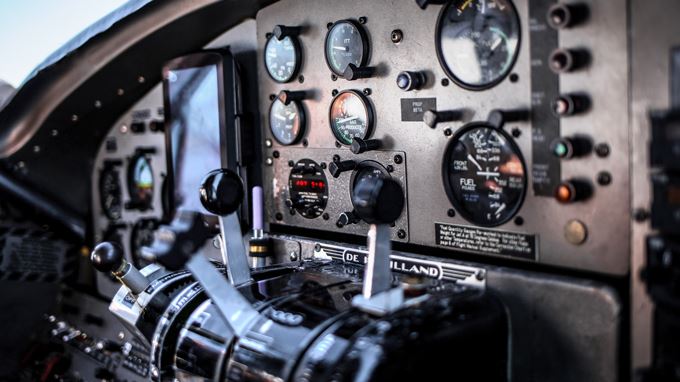 Shawn Braiden is a difficult man to find.

When he’s not on the floor in Harbour Air’s South Vancouver-based hangar directing traffic, he’s spending time with his growing family or soaring through the skies in his own personal aircraft.

You see, for Harbour Air’s PRM (Person Responsible for Maintenance) for Aeroflite International, aviation is more than a job, it’s a lifelong obsession.

Shawn’s a busy guy, but I was able to catch up with him a couple weeks ago to learn more about working for a seaplane company.

My official title is Person Responsible for Maintenance (or PRM) for Aeroflite International Services Ltd. I’m the PRM for Harbour Air Ltd., West Coast Air Ltd., Harbour Air Vertical, which is the helicopter division of Harbour Air, and the PRM of Harbour Air’s manufacturing division as well as Tantalus Air.

It’s the same sort of job but it’s for all the different airlines and different spots.

Which part do you enjoy the most?

Pretty much my whole life I’ve been obsessed. I’ve been flying model airplanes since I was 10 or 12 and building models prior to that. I’ve always been interested in airplanes.

How did that passion bring you here to Harbour Air?

I grew up over on Salt Spring Island and I was neighbours with St. Clair McColl. He’s one of the guys that runs Saltspring Air. That’s how I got involved with Harbour Air or got to know about Harbour Air, through St., and then we had some other friends who worked for helicopter outfits and worked for other different things. I would get to poke my head in and get involved with aviation that way and then basically once I left high school, I got my pilot’s license in Victoria and worked at the Victoria Flying Club.

I went to BCIT in the AME (Aircraft Maintenance Engineering) program.  I had my first apprentice job before finishing my schooling at BCIT just washing planes and other odds and ends. Once finishing, I was hired and I came over and visited Bob Bater who was in charge of the hangar here, the Chief Engineer at the time, I got hired running the maintenance part of Harbour Air.

What made you decide to build the planes instead of flying them?

It was really just an opportunity that came up and that’s about it. I’m still very interested in doing the flying, I don’t know if I’d ever go off and try to do it commercially but I still enjoy flying a lot. A lot of the guys that I talk to who fly commercially now, they don’t fly on their days off because it’s their job, they need a break. Me on the other hand, I’m always flying on my days off or wrenching on my days off. So it doesn’t seem to bother me which one it is so if one day I go off to fly commercially here or something or do the odd bit of flying, who knows?

Right now, I’m more than busy with the stuff I’m doing now, which is great.

A lot of people report to you. What’s your management style? How do you get the job done in so many different areas?

I’m always learning as I go, and I think the guys appreciate that. I do get feedback back from time to time from different guys and sometimes I change the way I’m doing things and sometimes I don’t. It’s a constant learning process. What that style is I don’t know if I could put a name to it.

I think that’s your style right there, to try to keep learning. People feed off that and it makes them want to improve too.

Yeah. Just constantly learning. I work with some other managers here that are really good. We all get along really well together. We work well as a team. I don’t think I could do it without them so it all works out really well that way.

This is going to be a loaded question, I’ll tell you right now. Just describe a typical day here for you.

You only get two minutes, too.

Gotcha. I get here usually at 6 am. Meet up with some of the guys for coffee. We talk about what was going on the day before and world events and whatever else. Solve the world’s problems, you know.

Good. Thanks for that by the way.

No problem. We talk to the pilots in the morning, they come in to check their airplanes. We give them a hand pulling the airplanes out, put them in the water etc.

You have to do that everyday?

Yeah we do that everyday. It’s usually Chris, one of the guys in the hangar, he does a lot of the actual launching now. So we put the airplanes in the water and then turn the fuel on and I try to go visit dispatch if I can, see how things are going with them. Come back to the shop, make sure all the guys in the sheet metal department, they all start at 7, make sure they’ve all got stuff to work on, and they’re all happy and they have everything they need to get their job done and if they need me I try and support them to get their stuff done.

Then Wayne comes in and he’s got a few projects he’s working on so I try to leave him alone. I’m there making sure all the guys in the west hangar have things to do, have everything they need and then it’s usually taking care of emails and solving issues that are going on in different locations. And it all depends on the day, some days are more challenging than others. And then I work with both Erika’s (Maintenance & Engineering & Quality managers), Kaley (Purchasing manager), & John (Production manager), we make sure we get everything going for the crew. We’ve got all kinds of projects we’re trying working on, never a dull moment around here!

Then usually Peter visits at about 9 o’clock, 10 o’clock, something like that. He’s the Exec for the maintenance department and President of Harbour Air, Peter Evans. We give him a quick summary of the goings on and then just continue basically doing that throughout the day, trying to make sure all the projects are moving along.

Greg Hol is the YVR Maintenance Coordinator, he’s got everything moving smoothly. Paul Stewart is the other alternate PRM. He’s the coordinator for downtown, we keep him in the loop with everything that’s going on and make sure he has everything he needs and we keep on motoring along.

You just recited all that just instantly. Is it just a matter of routine now?

Yep, that’s pretty much a normal day. Usually Erika’s trying to kick me out of here about 5 o’clock, 4 o’clock. A lot of times I’m here till about 6. Sometimes 7.

That’s Shawn Braiden in a nutshell, an intense work ethic born out of a lifelong obsession for being around airplanes. And of course we weren’t able to fit Shawn’s life in aviation in just one post. In part two with Harbour Air’s PRM we’ll get into Shawn’s life away from the hangar and learn why he’s lot busier at home now, too.