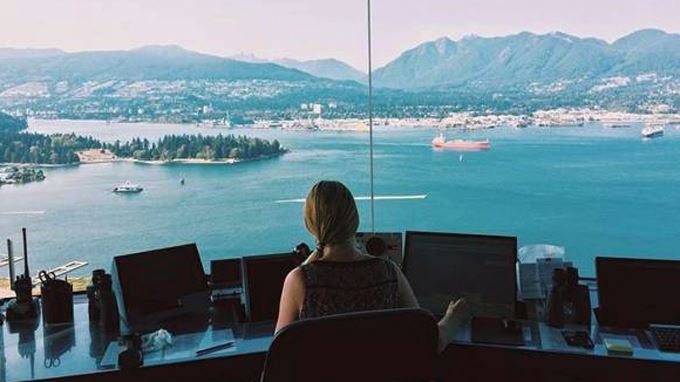 “I really believe life is yours to shape how you’d like, no matter where that takes you.”

It’s always to difficult to sum up someone’s career in 1200 words, but fortunately for me, Kim Marshall didn’t mind offering up just a couple of the bright spots. I’m writing this the day after Kim retired from Nav Canada (Nav Canada is a privately run, not-for-profit corporation that owns and operates Canada’s civil air navigation system), and after a career that began with the Canadian Armed forces and ended in a tower high above Vancouver’s Coal Harbour, she’s learned a lot about herself and the nature of the aviation industry.

Kelvin: You’ve been working in Coal Harbour in downtown Vancouver for some time. I apologize for reducing a long and illustrious career like this, but can you re-live some of the highlights with me?

Kim: It all started when I joined the department of National Defense in ’86 as an officer, I went through basic training and air traffic control training in Cold Lake, Alberta. Cold Lake captures small town Alberta quite well, it’s kind of like the Canadian version of Top Gun.

(Laughs) Well, not as many as you’d think anyways. I loved the military; I was fresh out of university and joined along with a lot of other young people. I was training to be an air traffic controller and my friends were training to be fighter pilots. It was a great experience, crammed together and learning together. You needed each other and everyone looked out for one another. As far as air traffic was concerned, it was a lot to take in early in your career. There’s a lot of pressure and they made sure we knew that early. The hard part about Cold Lake was it was a training base and the job was stressful, you had to learn how to manage your stress. You deal with a lot of type A personalities and people who like things a certain way. Being a young woman was difficult in that environment at that time. It was tough but I learned so much. People were very protective of us and that’s a mentality I’ve tried to bring with me into the civilian world.

I transferred in 1990 leaving the military and moving to Vancouver to be a civilian controller. I started in Pitt Meadows and eventually went to Langley Tower. We were living in Cold Lake and I came out for an interview at the Vancouver tower, that’s when I made an arrangement to see the Harbour tower and that’s when I knew I needed to work in that tower some day.

It took me six years from that day until I got a job there, but it happened.

What were some of the challenges of wearing the many hats required to oversee all those different aspects of aircraft operation in the harbour?

The biggest thing is how much the industry and floatplane companies (Harbour Air Seaplanes being the largest)have changed over the years. There used to be many separate companies, West Coast, Baxter, Saltspring, Whistler Air, Sea Air, Helijet, and all the associated helicopter companies in the lower mainland. Harbour Air has absorbed a lot of those and it’s all flying under the same banner now. The Harbour deals with a variety of traffic, lots of helicopter traffic, movie shoots, traffic watches and aircrafts coming and going from Vancouver Island, plus the corridor going up to Whistler. It’s a really busy place in the summer and then low key in the winter, unless there is poor weather.

So you’re getting out just at the right time?

(Laughs) Yep, it’s going to be busier than ever this year, aviation is experiencing a bump. There’s definitely been an increase in traffic since we experienced a dip around 2008. I think the economy has a lot to do with it. Air travel is the first thing to fall off, it’s the first thing to pick up. There was definitely a significant change in traffic over the past few years but last summer picked up big time and already this year things have picked up. With the American dollar and the cost of cruises, thereappears to be more tours. There’s going to be an extra Beaver which will help the tours around the city and up to Whistler this season. The summer is starting early this year, but overall weather patterns have changed and there’s more opportunity for more flying days.

Let’s rewind, before your career started – is this how you saw it all playing out?

(Laughs) No, I went to school for kinesiology. My parents were living in Germany and my father was a major in the Canadian Forces. I moved back to Germany after university because I liked to ski. I’d ski with a bunch of people and some of them were air traffic controllers. They told me I’d make a good controller, and I didn’t believe them. I had no idea what an air traffic controller actually did. So after university, discovering the reality that kinesiology jobs in those days were basically glorified recreation administrators, I gave in and applied to the Canadian Forces. My brother was a colonel in the military and he signed me inback in ’86 which was so cool. I went to Chilliwack, BC for the first time and my love for BC began. We had our graduation during the ’86 expo on a boat right off Coal Harbour and I remember telling my friends I’d really love to live in BC some day.

That’s really when I started to imagine a future I could see myself living in. If you see the master picture then I firmly believe it’s possible to make it come true. That’s one thing about the harbour – you can work in other places that are busier and more stressful, but I always wanted a good work-life balance. I’d never lived in a big city before so I was excited about living and working in Coal Harbour. And so I did!

You’re officially retired as of…

Oh wow, congrats! What’s next for you?

I’m leaving for Spain in a couple weeks, we’re going to have a family vacation but after that I’m actually going to be working for Harbour Air two days a week in Whistler. Whistler is amazing, Green Lake, that dock – I’ve traded one really good view for another. I live in Pemberton so it’s close; my partner Adam built our house here. My master plan was to end up here full time eventually. I’ve driven up on my days off for the last several years, so the Whistler thing is a good fit. Adam is a helicopter pilot for Blackcomb Helicopters so the master plan is coming true. Once again.

Just like we hoped, yes. There can be glitches, but your life is what you make, and the coming days my life will be spent on our acreage with Adam and the dogs, Ted and Dex, watching it all unfold again.